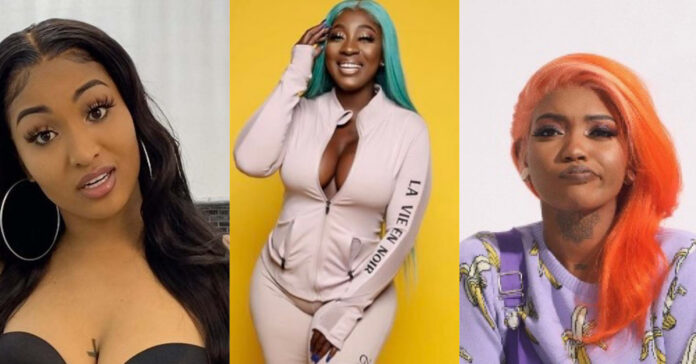 Shenseea has clapped back at Jada Kingdom and Spice following an apparent jab on Instagram.

The “Lighter” star took to Instagram earlier today to clap back some apparent shade with jabs of her own. The star had tongues wagging as she sent a cryptic message to her haters with a Insta Story video clip.

Fans quickly speculated that the post was a direct clap-back towards Spice and Jada Kingdom.

“A could never jada or spice she a throw shade pon 🙄” one fan lamented. Another fan also felt similar sentiments complaining, “Let me guess! She feel a way because Jada and Spice showed love to each other.”

However, some of Shenseea’s supporters did come to her backing, calling out the pair for their actions.

“But by the way Shenseea has big Spice up many of times. SPICE IS BADMIND BUT SNEAKY WITH IT,” one fan declared.

Earlier today Spice sparked controversy after claiming Jada Kingdom was the only female artiste to admit they’ve learnt from her illustrious career.

“Thanks @jadakingdom your appreciation means alot to me. In all my years in this industry I’ve never been tagged by a female artist to say they watched and learned anything from me,” Spice declared.

She then continued “You told me even on Club house that you use to sit and watch my performances and look at you now, mashing up every where you go. Big up uself Mumma heavy your heart speaks volume ✊🏿 I’m a big fan I’m so proud of you and your growth is impeccable. 🔥🔥🔥🔥”

However, it was the next line that had tongues wagging, with many fans claiming it was a jab towards Shenseea. “Nuff artist nuh wah big up who come before dem & give credit to who dem learn from…mi nave dat inna mi.”

Spice Hails Jada Kingdom As The Only Female Artist To Credit...