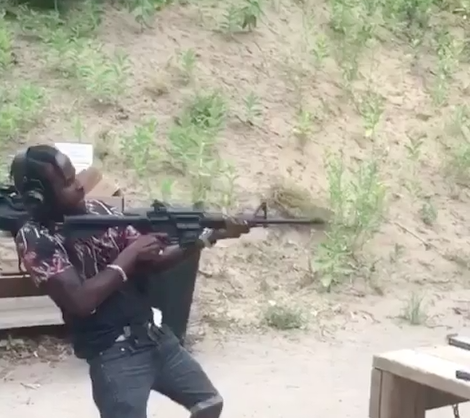 Popcaan has set the record straight on a recent viral video following criticism from some fans.

The “Strong & Firm” deejay was criticized by some fans earlier this week after a viral video emerged with the deejay discharging weapons at a gun range in a questionable manner.

Some fans accused the deejay of being very “irresponsible” in the video clip, claiming that he used the weapons, including a high powered rifle, in a very unsafe way. Several others also others blasted the deejay for glorifying guns.

The footage also attracted the interest of law enforcement officials, who are reportedly looking into the matter.

Checkout Popcaan’s Clapback To Fan Who Called Him A Thief

Representatives for the “Family” deejay have however hit back saying the entertainer was in a safe, supervised environment, with qualified personnel there ensuring his and everyone’s safety.

The deejay’s management team provided a signed letter by a licensed firearm holder in Ontario, attesting to the fact that it was a supervised exercise.

They revealed that the footage was recorded at the Lower Trent Valley Fish and Game Club, in Ontario, Canada while the entertainer was on tour.

Popcaan is set to release his sophomore album “Forever” later this month. The project which is produced by Mixpak Records is due to hit digital stores on July 20.