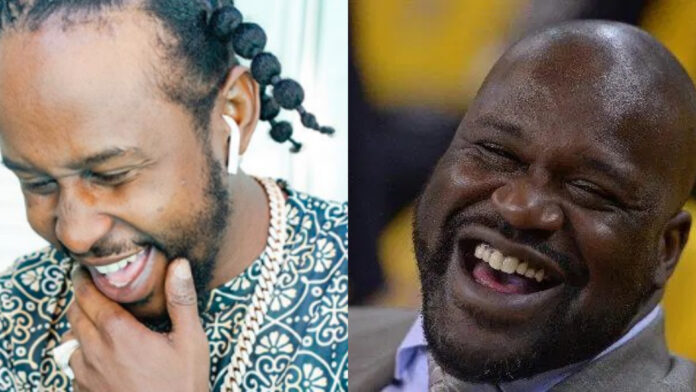 American basketball legend Shaquille O’Neal is showing off his Jamaican dancing skills to one of Popcaan’s tracks.

In the clip, Shaq can be seen pulling off a few of Jamaica’s legendary dance moves including the Willie Bounce, Bogle, and Butterfly.

The post did not go unnoticed by the Unruly Boss, who hilariously replied “Chubble” with several laughing emojis. Several other Dancehall stars including Dre Island also joined in on the fun also dropping a few emojis.

It seems Shaq’s skills were not too bad either, with many even branding him a honorary Jamaican.

“Shaq got some yardie in him,” one follower declared, while another went on to dub him ‘Shaqqa Ranks.’

Unsurprising Shaq does have a little ‘Yaardy’ in him, as he was actually raised by Jamaican stepfather Phillip Harrison.

Harrison, a U.S. Army veteran was married Shaq’s mother and raised him as his own son since he was 2-years-old.

According to an amomamma.com, Harrison, a drill sergeant raised Shaq as his flesh and blood from the age of two, “became his father, teaching him to tie his shoes, brush his teeth and play the pivot”.

This is not the first time Shaq has endorsed a Jamaican culture as he previously highlighted Dancehall artiste Don Andre.

In November 2015 O’Neal photoshopped his head on the body of Renae 6:30 as she danced to Don Andre’s explicit single Needle Eye, which sparked some controversy among fans at the time.

Despite the controversy, Don Andre said he was grateful his music was “reaching new nations and breaking into other cultures.”

“I am very, very, very grateful for Shaq’s endorsement because not a lot of dancehall artistes get a chance to be on that platform you can’t pay for that.  That’s what we are all working for… for dancehall music to be recognised on the mainstream by celebrities all over the world,” he told The Star at the time.