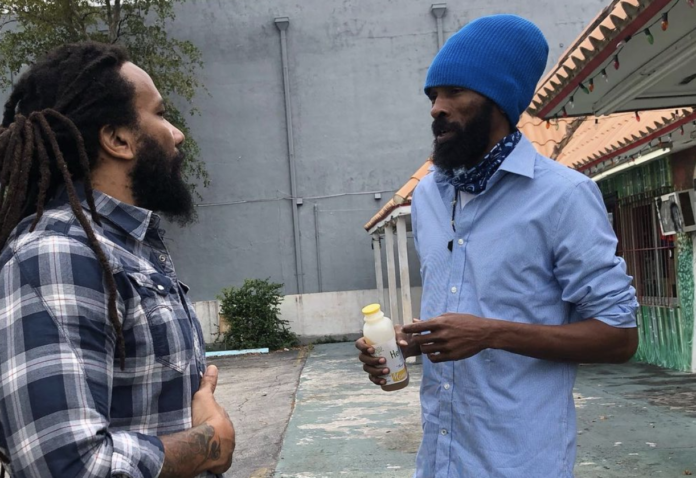 The two sent social media into a frenzy when Spragga Benz uploaded a video with Marley. In the video, Ky-Mani can be seen driving as Sprgga promotes his new album the “The Journey Chosen.”

“Wayne and Bigz at it again…in full effect💯💯,” one fan quickly wrote in the comment section. “Who dat … Wayne and Biggs… top shottas are back 🤘🏾🤘🏾🤘🏾🤘🏾,” a second comment read.

“Shottaz series on Netflix wit all di reggae artist we a wait pon it,” another added.

The ‘Shottas’ sequel was confirmed back in 2018.

Veteran recording artiste, actor Spragga Benz who played Wayne revealed on social media that he got a fifty-seven page script to read over for ‘Shottas 2’ by Richie Effs and Micheal Wekerle.

Released in 2002, Shottas is a Jamaican crime film about two young men who participate in organized crime in Kingston, Jamaica and Miami, Florida.

Shottas tells the story of two young men, Ky-Mani Marley’s character Biggs (Errol) and Wayne (Spragga Benz), who grow up together in the tough and dangerous streets of Waterhouse, Kingston. They rob a soda truck and shoot the truck driver while they are still children.

The robbery money is used to purchase visas to go the United States, where they continue their criminal activities, hustling on the streets of Miami. Twenty years later, Biggs is then deported to Jamaica where Wayne and Mad Max (Paul Campbell), also deported, have continued their surge in crime, they begin to extort money from business people. After facing problems with the police and politicians, the two head back to Miami alongside Mad Max.

Upon returning, they are informed that Miami has a new king, Teddy Bruck Shut who is played by Louie Rankin. The three pay Teddy a visit to extort him. They extort, beat, and murder their way to the top of the Miami underworld before their dream ends in a brazen shoot out, during which Teddy’s thugs kill Wayne and shoot Max. Biggs almost gets shot as he comforts Wayne at his deathbed, but Max shoots the assailant before it happens. After taking Max to the hospital, Biggs goes to Teddy’s house and murders him, his bodyguard and his girlfriend. Biggs then takes all the money and gets on a boat.

D’Angel Sends Message To Her Haters For The New Year