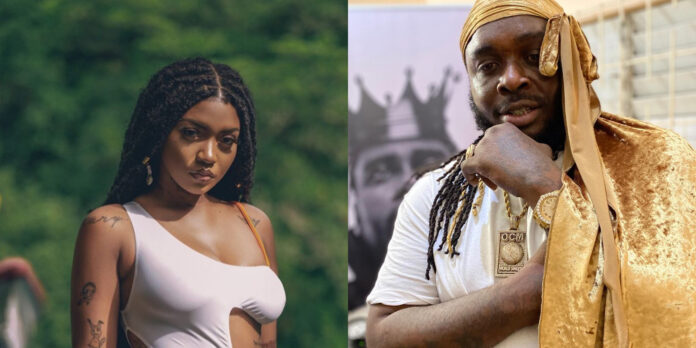 Jada Kingdom wants to collaborate on a remix for Jah Vinci’s hit single “Virgin,” and fans are definitely here for it.

The “Heavy” singer is seemingly in love with Jah Vinci’s new single from his EP “I Am The World Singer.” So much she decided to shoot her shot for a remix with the former Gaza singjay in the comments on YouTube.

Recently the “Budum” hopped on Jah Vinci’s “Virgin” YouTube, to comment “Remix?👀.” It was simple but enough to get fans excited at the prospect of having both stars on the same track.

“Trust me, it wuda shock like a tazer,” one fan wrote, while another urged the Bedroom Bully songstress “Dweet quick.”

The comment has since received over 2600 likes, with many fans calling on the singer to make it happen.

Jah Vinci has yet to reply to the request but there’s no doubt that a collaboration would amp up the sex appeal tremendously.

In recent months, Eastsyde Queen has been one of the biggest trending female stars in the genre with countless hits. In 2020 she scored hit singles such as Budum, Bedroom Bully, and Tek It with Skillibeng.

Jah Vinci is currently riding high on the success of his latest EP, “I Am The World Singer.” The 7 track project debuted in Apple Music’s Top 5 and the visuals for, Virgin, recently surpassed a million views.

To celebrate, Jah Vinci recently took to Instagram to say, “I may not have the number 1 trending song but damn 1M views in 4 weeks feels damn good!!! “VIRGIN” #congratsteamOCM #notnicerecords thanks to every one sharing and showing love I appreciate you all.”

Jah Vinci Hits The Right Note With ‘I Am The World...