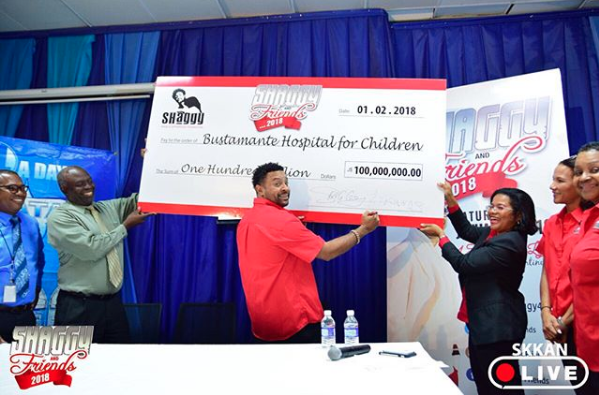 The handing over took place in the boardroom of the hospital, with Shaggy’s Make A Difference Foundation being recognized as the architect behind the funds that were generated.

The funds were earned from the Shaggy and Friends stage show which was staged on January 6 on the lawns of Jamaica House, with Shaggy being joined by other international performers, Sting, Wyclef Jean and Doug E Fresh, which aided in the presentation of a stellar entertainment package for the thousands who had turned out for the event.

The show also attracted a variety of local performers, with Dexta Daps, Barrington Levy and Junior Reid, as well as the husband and wife calypso team from Trinidad and Tobago, Bunji Garlin and Fay-Ann Lyons, being among the stars.

According to Shaggy, whose given name is Orville Burrell, while the venture this year earned $100 million, expenditure took a whopping $50 million, but with the help of local and international donors, including corporate entities and individuals, they were able to carry the amount back to the $100 million that had been targeted by the Shaggy Make A Difference Foundation.