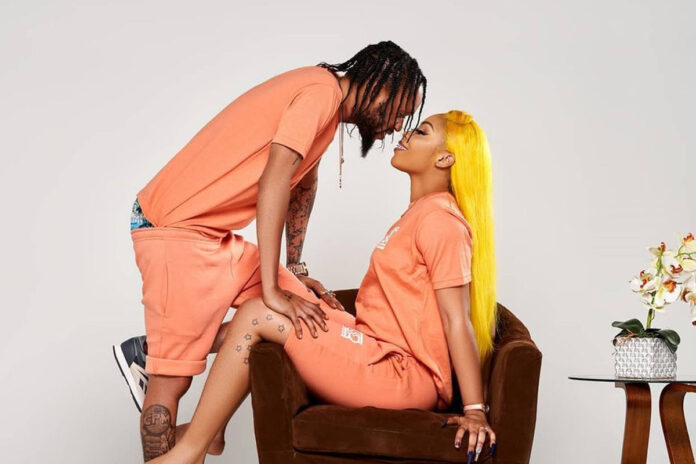 I Waata’s alleged baby mother has emerged online amid his public apology to girlfriend Pretty Pretty for cheating.

The “Cut Off Jeans” star’s alleged baby mother recently emerged after posting a pic of herself, I Waata, and their 3-month-old baby. The post immediately sent social media ablaze with fans quickly connecting the dots.

Fans say the two have been linked together for years and were previously spotted at a hospital together.

The revelation came after I Waata’s longtime girlfriend, Pretty Pretty, shared a pic of him for his birthday. In the post, she proudly confessed her love and admiration for him, while speaking on their growth.

However, the emotional moment was quickly ruined as the blue-haired female posted a rivaling snapshot soon after.

Amid the controversy, I Waata took to Instagram to send an emotional apology to Pretty Pretty.

“Nuh matter what happen u ago always be fimimimi an this is not a media thing u deh deh fimi b4 me even have a name nuff fkry me do an u look over dem an me rate an respect u 1000% Mimi knw u feel cut up an hurt but me knw fi sure we can fix this sorry fi bring u down pon d media like this still bby but nah watch r listen d crowd me see bigger Dan we fk up an dem fix back dem life cause NOBODY NUH PERFECT.”

The two have been dating for over a decade, with their relationship starting when they were just 15-years-old.

Pretty Pretty is a prominent member of Spice’s ‘team Spice’ dancers, and is currently making the transition into music. She recently released her debut single “Buzzy” with fellow dancing partner Rebel.

It remains unclear if the two are still together, but the dancer has hinted that she would not be taking any more disrespect.