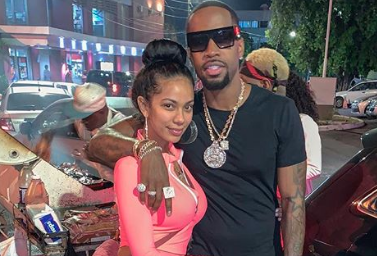 Safaree gave the American reality show personality her Jamaica pass on Friday night after the two the Love & Hip Hop: New York stars enjoyed some Jerk Chicken on the road side shortly after arriving on the island.

“You’re really Jamaica tonight,” Safaree said to Erica as she sat down waiting on her chicken, “Hey listen, Erica is officially Jamaica, road side a yard… The real jerk,” he continued.

Safaree will be hosting the Boom Energy Drink black carpet live stream at Buju Banton’s Long Walk to Freedom show in Jamaica alongside Miss Kitty and Amita on Saturday night.

The show will be streamed live on Boom’s official Facebook page from 7pm to 8pm.