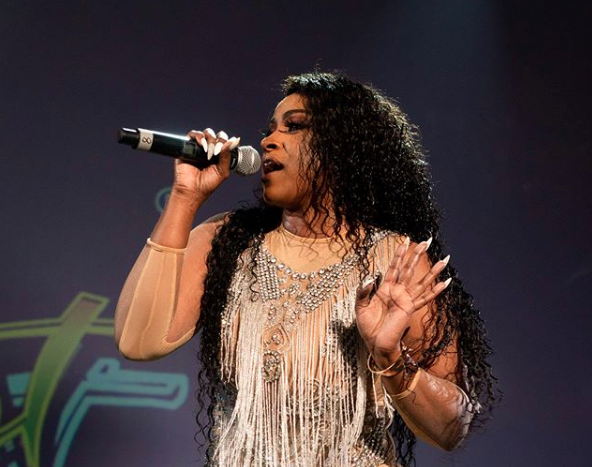 Yanique Curvy Diva has sought to address the ongoing backlash on social media over her latest viral video.

The media vixen-turned-recording artiste caused quite an uproar online earlier this week after she removed her underwear at PrideJA Breakfast party on Tuesday (August 6).

While the selector was playing Dexta Daps’ smash hit single “No Underwear,” the Curvy Diva stopped the music and removed her undergarments, “Hold this fimi deh,” she told the MC while handing him the microphone and proceeded to take off her underwear, “Mi cyaa play deh song yah and have on underwear, that nuh mek no sense. Draws affi go! Draws affi go.” she told the audience.

The “Lifestyle” singer’s video instantly went viral with Dancehall fans chiming in, labelling her actions as classless and distasteful.

Unfazed by the social media frenzy, Yanique ‘Curvy Diva’ Barrett is now hitting back at critics whom she says are close-minded.

According to the former Magnum Kings and Queens of Dancehall host, she has no regrets as her actions at the event were purely for entertainment, “I don’t regret my actions because at the end of the day, it’s all in the name of entertainment. It was something we thought about, we planned,” Yanique told The Star. “Dexta was not slated to perform and so my team and I said it was something we would do. I had on a next pair of underwear and I had on stockings as well so me taking off underwear was all part of it,” she said. “The song say ‘ she nah wear no underwear’ so it was all in the name of fun and entertainment. I don’t understand the blow-up but it’s fine, we expect it. Jamaicans sometimes are a bit close-minded and we’re fine.”

We can only wait and see what Yanique Curvy Diva and her team will cook up next as she has no plans of slowing down, “Dancehall is sexy and ‘vulgar’. Lady Saw was raunchy, Spice is raunchy and I don’t see myself doing anymore than them,” she continued.