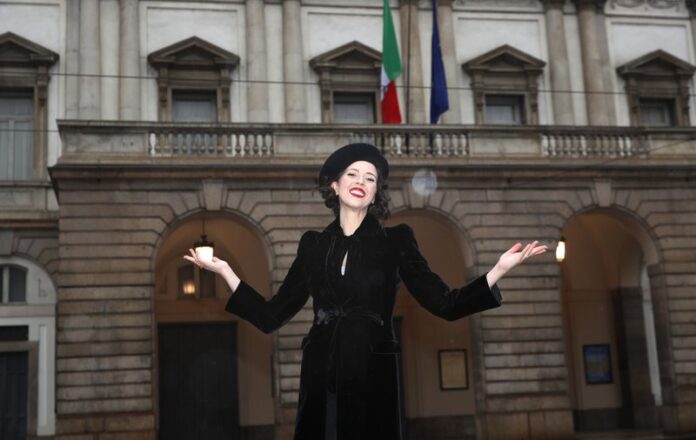 MILAN (AP) — Soprano Lisette Oropesa was to be the first American to sing a title role in the gala season opener at La Scala since Maria Callas in the 1950s. Then Italy’s virus cases surged.

An outbreak in both La Scala’s chorus and its orchestra forced the country’s premier opera house to cancel for the first time one of the top events on Europe’s cultural calendar.

Oropesa is now set to be one of more than 20 opera stars, among them Placido Domingo, Roberto Alagna and Piotr Beczała, recording arias and duets from the tiered theater for a broadcast gala event marking the traditional Dec. 7 opening. But there will be no glittering crowds, and no celebratory dinner. In fact, on Monday night the theater in Milan will be mostly empty.

By then, Oropesa will be in Barcelona, where she is performing next week. That comes after a whirlwind 2½ days in Milan that include a COVID-19 test, a gown fitting at Giorgio Armani for her part in the show, a dress rehearsal and, finally, performing for a TV camera an aria she had prepared for her opening night as “Lucia di Lammermoor.”

Despite the disappointment of missing her La Scala season-opener debut, Oropesa, 37, still hopes to reprise the title role in Donizetti’s opera in Milan once performances can return to Italy’s theaters.

“To sing a title in an Italian opera as an American soprano is a pretty big deal,” Oropesa said in a phone interview from Barcelona, where she was rehearsing the role of Violetta in “La Traviata.”

And doing on the La Scala stage for the coveted season-opener is even bigger. Here, Oropesa, a second-generation Cuban-American born in New Orleans, was set to follow in the footsteps of Callas — also a daughter of immigrants — who opened La Scala’s 1955 season singing the title role in Bellini’s “Norma.”

“It is a rare thing to get that honor, and it is definitely important to me. It is more than that: To get to sing Lucia di Lammermoor in an Italian theater at all is beyond belief. I was really looking forward to that,” she said.

“I hope it happens in the future. If it doesn’t, it wasn’t meant to be.”

Oropesa was already in Milan and two weeks into rehearsals when the fall virus resurgence shut down theaters. Even before the partial lockdown in Lombardy, the theater had been hit by a virus outbreak that eventually infected 43 chorus singers and 18 musicians. That made staging the full opera —even to an empty theater as other theaters have done — too big a health risk. Management opted for a gala evening of star singers and ballet dancers, mostly recorded in segments in advance.

“By the time you get to the rehearsals as an opera singer, you have done 90% of the work,” Oropesa said. “We were doing a version of the role I have never done before in different keys higher than I usually sing. To get there, and start digesting the staging, and the costumes and to stop it midway is like cooking the turkey for Thanksgiving, and someone turns it off halfway done.”

Oropesa counts herself lucky she is working at all in a season of rolling theater shutdowns that has left many singers and musicians struggling to get by.

After about a decade at the Metropolitan Opera, where she was part of the young artists program and made her debut at age 22, she shifted her career toward Europe. Her knowledge of Spanish helped ease her into the Italian repertoire, and her New Orleans upbringing boosted her with the French. Oropesa’s international breakthrough role was as Lucia di Lammermoor at the Royal Opera House in London in 2017, and since then she has performed in Madrid, the Paris Opera and La Scala, while keeping up ties at the Met.

In 2019, she was the recipient of two prestigious opera awards — the Beverly Sills Artist Award for rising young singers and the Richard Tucker Award.

But 2020 has been different for everyone. Oropesa was four performances into a six-date run as Violetta in “La Traviata” at the Met when it closed due to the virus last spring. And she sang at the Vienna Staatsoper in October just before Austria’s lockdown put the season on hiatus.

Friends back in the United States, where theaters have been on a tight shutdown all year, have had it tougher, she said, generating income when they can with singing lessons and virtual concerts, but also as Uber drivers and construction workers.

“I was fortunate enough to kind of be in the right place at the right time,” she said. “I lost a lot of things, too. I lost Lucia in Milan. I have lost New Year’s eve stuff.

“You lose one, you get another. If you are lucky you break even.”