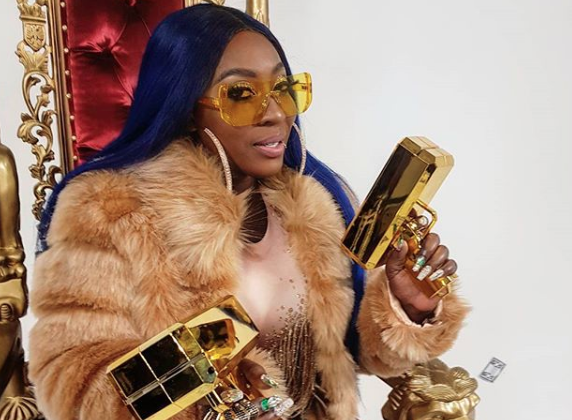 Spice is not the one you want to play with.

In an exclusive footage, the ‘Duffle Bag’ deejay can be seen having a verbal altercation with a cast member who asked “Do you know me?”. Spice then hit back saying, “No i don’t know you…… I don’t wanna know you!.”

Things then got ugly and the two had to be restrained as the woman warned Spice to get out of her face. Atlanta rapper Yung Joc also stepped in yelling “Y’all ain’t about to do this sh*t.”

Dancehall fans were sent into a frenzy last month when it was revealed that the newly crowned ‘Queen of Dancehall’ was added to the cast of Love & Hip Hop Atlanta season 7.

According to the network, Spice whose real name is Grace Hamilton, will be channeling her inner Amara La Negra to crossover from Dancehall into the American music industry in the new season.

Dancehall fans can expect to see Spice working on her international career as she will be hitting the studio with producer Stevie J and other current and former cast members.

Spice is no stranger to the docu-soap franchise as she was a guest on the show last year when the cast visited Jamaica in 2017. Season seven of Love and Hip Hop: Atlanta will start on March 19.

Check out Spice’s first brawl on the show below. We are sure they will be more to come.