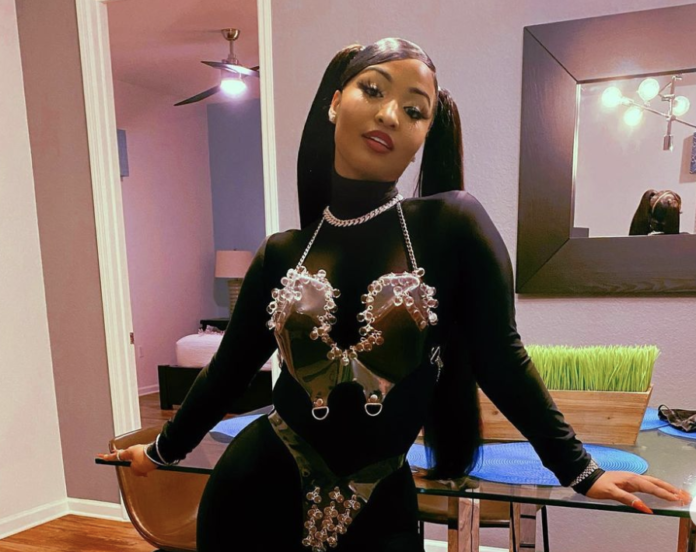 Shenseea says she is not concerned with titles despite fans dubbing her the next ‘Dancehall Queen.’

The Dancehall superstar had fans talking over the weekend following the release of her latest freestyle video.

In the footage, Shenseea’s sharp lyrical skills were on full display as she confidently flexed her clever wordplay skills. The viral video would receive praise from thousands of fans including a host of American stars like actress LaLa and rapper Missy Elliot.

Many are now calling the “Lighter” star the next ‘Dancehall Queen’ after the sharp display of lyrical potency. According to fans, it is only a matter of time before she wrestles the crown from current holder Spice. These claims were further backed up by comparisons to American rapper Nicki Minaj.

However, while being flattered by the comments Shenseea says she is not particularly concerned about titles.

“I’m honored that they see me as such but it wasn’t a title I’ve always wanted. I want to do music and enjoy it for the fun not because it is expected of me to do so,” she said.

According to Shenseea, she is not trying to prove her worth, instead, she remains focused on delivering quality music.

“I feel exposed — in a good way of course — and I’m grateful for that because I get to showcase my talent while representing the culture. But it wasn’t even a goal of mine to prove them (naysayers) wrong. I’ve just been exercising my passion because I genuinely love what I do,” she said.

Ironically, Shenseea was heavily criticized by fans in 2018 for suggesting she was next in line to the throne. Many claimed she was ‘getting ahead of herself’ after she dubbed herself the ‘princess’ of Dancehall.

Now it seems some of those same critics are singing a completely different tune. Not only have they given her the ‘princess crown’ but they claim she could be ready to wrestle the Queen title away from Spice.