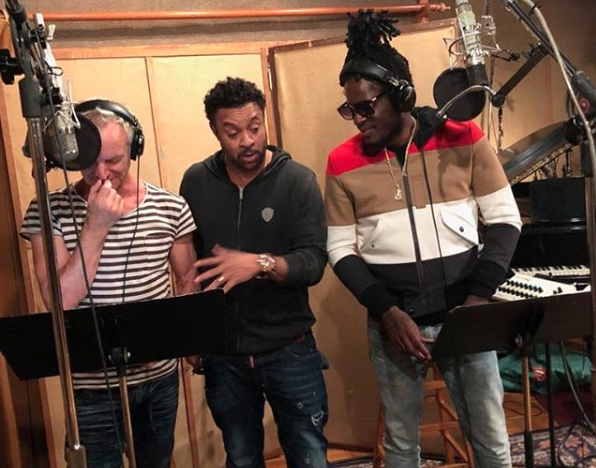 Shaggy thanked Aidonia and Morgan Heritage for the contribution on his Grammy-winning  “44/876” album with Sting.

Shaggy and Sting won the prestigious award on Sunday night at the 61st Annual Grammy Awards which was held at the Staples Center in Los Angeles, California.

“Big thanx to @aidonia4thgenna for his contribution on this Grammy award winning album 44/876 congrats!,” Shaggy wrote under a photo of himself with Sting and Aidonia recording their collaboration.

“Much Respect to morgan heritage for lending their vocals on our 44/876 Grammy award winning album @theofficialsting and I are eternally grateful! Congrats!,” he wrote in another post.

Last year Billboard Magazine named 44/876 as the top-selling reggae album of 2018. It has sold more than 52,000 copies and occupied the number one spot on the Billboard Reggae Album Chart for 23 weeks.

Shaggy and Sting earned a whopping US$10 million on the first leg of their 44/876 tour.

According to Billboard Magazine, the duo grossed US$10.8 million during the tour’s opening leg in Europe, securing the number four place on the Hot Tours chart.

The entertainer played to 132,155 fans in 23 sold-out shows. Some of these events were festivals, they also played theatres, parks and historical sites. The smallest and largest shows were in Italy: Trani (2,210) and Verona’s Arena di Verona (12,468).

Shaggy and Sting also had tour stops in Slovakia, Greece, Bulgaria and The Netherlands.