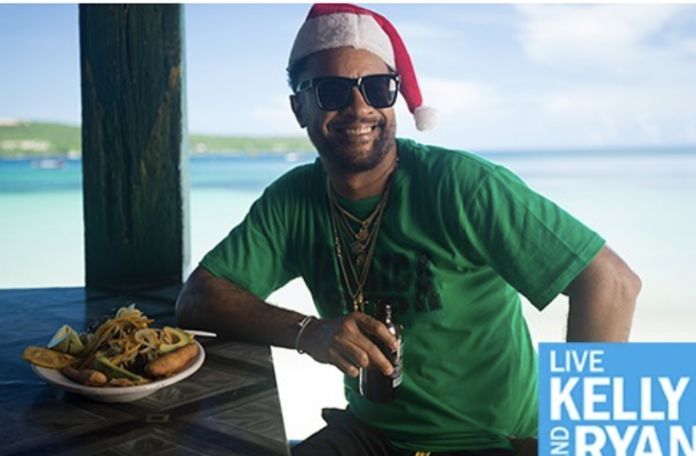 Shaggy appeared on ‘Good Morning America’ to perform “Have Yourself a Merry Little Christmas”.

The classic single is featured on the Grammy-winning entertainer’s new 15-track Christmas album, “Christmas In The Islands” released worldwide on November 20 via BMG.

“Raggamuffin Christmas” and “Holiday in Jamaica” form the soundtrack to a typical Grand Market Christmas party while the listener can almost envision being in the crystal blue waters at the Maiden Cay Christmas party on “Christmas Time,” “Open Presents” and the reggae-fied, “Have Yourself a Merry Little Christmas.”

Shaggy encapsulates the holiday allure of the islands in “No Icy Christmas,” “Sunny Celebration” and “Catch Myself Some Rays” while underscoring the joy of fun, sun, and rum on “Warm & Easy,” “Take You to the Cool” and the title track “Christmas in the Islands.”

Shaggy told GMA hosts Robin Roberts and Amy Robach that the album was actually supposed to be a collaboration between him and UK singer, Sting. That plan, however, didn’t come to fruition because of the coronavirus (COVID-19) pandemic.

“It started with me and Sting we did the Disney Christmas special last year, and we started doing a couple of songs in reggae, and we said wouldn’t it be cool to do like a reggae Christmas album?,” he explained.

“At the top of the year, I started working on the melodies and I played a couple of them for Sting, and then the pandemic hit. I figure the pandemic would last about two months. But then he was stuck in the UK, and I was stuck in Jamaica, and then it was clear then that it was going to be a Shaggy Christmas album,” he said.