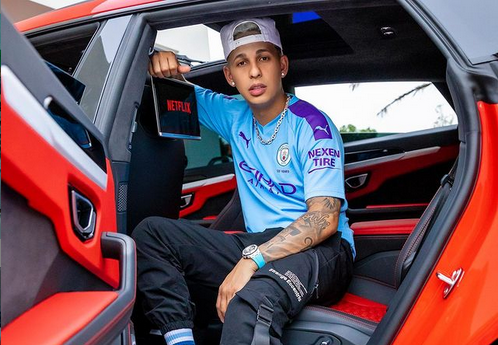 Jamaican producer Rvssian is thanking his lucky stars after escaping injury in a 5 vehicle pile-up.

The popular beat-maker took to Instagram earlier recently to share images of his damaged red Lamborghini Urus. “God is great, 5 cars wrecked, no one else was injured”, he posted in his Instagram stories.

It remains unclear what exactly transpired but the producer did reveal to fans in the post that “a car spun.”

The damage to Rvssian’s Lamborghini truck is considered minor, as it was spotted on the soft shoulder.

The luxury truck, dubbed ‘the world’s first super sport utility vehicle’ is one of Rvssian’s many cars.

Shortly after the accident, Rvssian took to Instagram to post another photo of himself and Dancehall star Konshens. In the photo, the producer could be seen posing with his Rolls Royce Wraith.

“God is Great” he captioned the post, to which Konshens replied, “Greatest bro. U have too much greatness to do here an God know that 🙏🏾 glad u safe.”