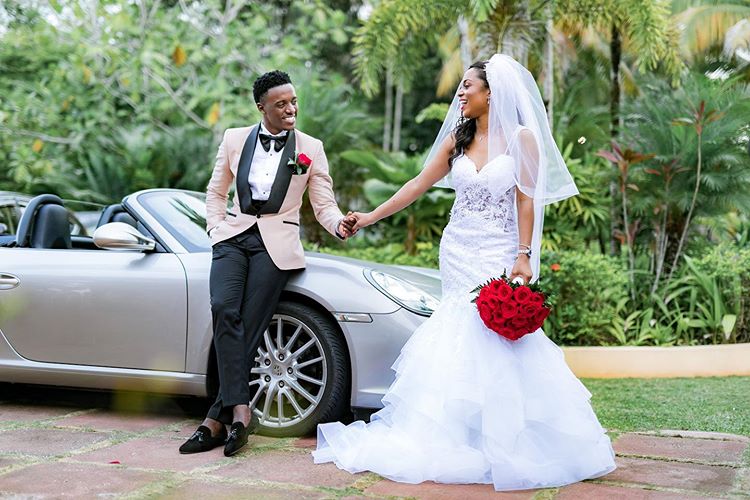 Romain Virgo and his wife Elizabeth recently shared a hilarious story of how they met.

The power couple uploaded unveiled the story in their second upload after creating a YouTube called The Virgos.

Romain and Elizabeth met over a decade ago at the airport when the “Lovesick” singer was in a relationship.

“I was there [at the airport] talking to a Rasta bredrin, and while I was there holdin dis nice reasoning wid di breda, I saw this beautiful woman coming towards me and shi run come to mi… and gi mi a ‘story’. She was like, excuse, one of my friend, she wants to say hi and I told her that I would come over to tell you to come say hit to her. Can you please come over and say hi to her? I was like yes, I would come,” Romain said in the video.

Elizabeth then quickly cut in to give her version of events. “….I walked over to you as if you were someone I know, or you know for a while ago… and I pointed to her, and I said ‘yuh see da girl deh over there suh, she really rate yuh so mi bet har a while a guh seh mi ago mek you come seh hi to her, and she nuh believe mi, so just come come say hi when yuh finish’,” she clarified.

Romain continued by sharing that he was struck by Elizabeth’s beauty, “I was like, wow, this woman though….I couldn’t keep my eyes off a yuh… I was saying, ‘wow she’s so beautiful’.”

At the time of their meeting, Romain Virgo was at the airport to send off his then-girlfriend whom lived overseas. According to Elizabeth, she had noticed that the singer’s lover and friend were staring at them.

“I noticed that two persons were looking in our direction, intently like they are waiting on somebody. So I said, ‘a you dem a wait pan? and you turn round a see dem, and mi seh ‘a yuh wife dat? And you said yes” Elizabeth said.

“Suh mi seh ‘yuh married? and yuh seh, no mi no married’” and wi laugh it off. “Mi seh ‘hurry up and gwaan because mi cya fight’.”