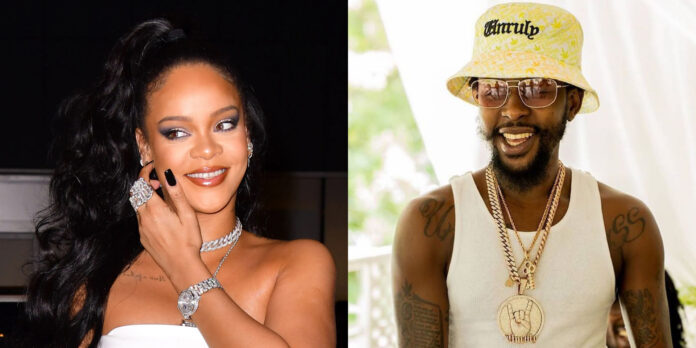 The Bajan superstar sent fans into a frenzy over the weekend after sharing a teasing photo on Instagram. The “Wild Thoughts” singer would then cap off the post with a few lines from a popular Popcaan track.

In the photo, the RiRi teased fans by posing topless while cover her chest with her hands. “When @popcaanmusic said “me nuh wan ya wear no lingerie tonight fa me girl,” she captioned the post.

The catchy lyrics are originally from Popcaan’s hit single “Naked,” which was featured on his Forever album.

Within hours the photo accumulated over 6.5 million Likes and hundreds of thousands of comments on Instagram.

Popcaan has yet to respond to the post, but without a doubt, the Unruly Boss is thankful for the highlight.

According to reports, Rihanna is set to drop her highly anticipated R9 album later this year. She recently got fans excited after teasing fans that they can expect new music sooner rather than later.

Rihanna recently confirmed that her upcoming project will be a Reggae-inspired set. “I like to look at it as a reggae-inspired or reggae-infused album,” she explained. “It’s not gonna be typical of what you know as reggae. But you’re going to feel the elements in all of the tracks.”