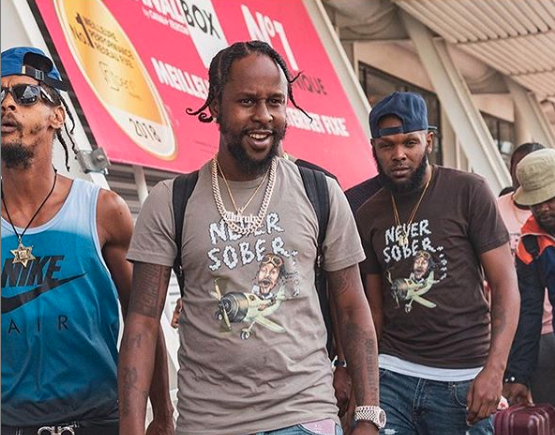 Popcaan is receiving a lot a love in Ghana!

The Dancehall superstar is causing pandemonium in Africa, as fans flock to see him during his visit.

Popcaan, who recently purchased a home in Ghana, has been traveling throughout the continent since his arrival in December.

Since his arrival, fans have been more than just a little eager to catch a glimpse of the entertainer.

Earlier this week Popcaan took to Instagram to show just a snippet of the pandemonium that his presence instigates.

In the three-part video shared the deejay is seen in a traffic jam surrounded by a sea of screaming fans. He captioned the post, “nima we deyya.”

In one of the video clips, the deejay can be heard saying, “Dawg all mi a tell unuh seh, Africa nuh normal a blo***at,” in amazement as hundreds flock his vehicle.

At one point the incident became so chaotic that the luxury vehicle he was traveling in was damaged.

The crowd was so large that Popcaan and his entourage were delayed several hours.

The crazy scenes saw the streets were filled with fans, some riding small bikes in groups while chanting “Unruly.” The scenes drew the comments of Popcaan’s close friend Drake who commented with a king emoji.

Despite the delays, the “Family” deejay really seems to be loving life in Africa. This did not go unnoticed by fellow dancehall artiste Shenseea, who asked, “U nuh plan fi gaa u yard?.”

Popcaan took to Instagram one final time to thank all his fans saying “The love is real big up Ghana the concert ago bom***aat crazy.”