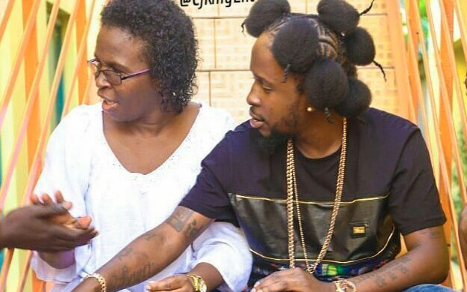 Popcaan will not tolerate anyone speaking negatively about Ms. Rona!

Popcaan is described as a fun, jovial person by many but he recently revealed his petty side after a fan crossed the line.

Fans were reminded of Popcaan’s petty following a wild interaction with a fan on Instagram. The entire ordeal took place after he posted a video with Ms. Rona saying “Longtime unu nuh see the boss!!! Happy new year mama❤️😂”

However, the moment was ruined as a fan stepped into the comments cheekily comparing Ms. Rona to Pop Smoke. Although the comment seemed innocent to most Popcaan was definitely not having it.

“Why your mom look like Pop Smoke,” the fan joked, which evidently irked the “Family” deejay.

Although the fan quickly apologized, insisting that the quip “came out wrong”, the Unruly Boss was not having it. The deejay promptly clapped back at the comment saying, “go force up yo big face inna yo muma!!!!”

The comment drew the attention of thousands of fans, who thankfully chose to see the lighter side of the situation.