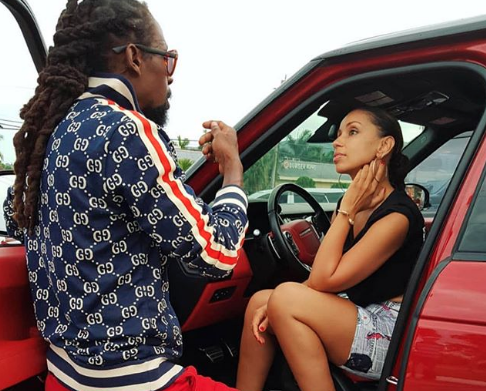 The American recording artiste and actress travelled to Jamaica last week to hit the studio with The Cure, after wrapping up business, the duo were spotted at several hot spots across the island.

The two have since sparked dating rumours after a photo was uploaded on Jah Cure’s Instagram account which shows the “Case of the Ex” singer looking deep into his eyes.

“No man look how she a look inna him eyes dem a lovers supn this,” one Dancehall/Reggae fan wrote. “Issa good look my two favs Jah Cure and Mya, y’all so cute together,” another wrote.

Woman Calls Out Jah Cure For Allegedly Disrespecting Her

However sources close to Jah Cure assured us that they are just great friends,”This is why most international artistes don’t want to work with Jamaicans,” the source said. “Too much mixup in the business and country, if an artiste is seen with someone, people automatically think they are dating.”

“Its strictly professional, she came to Jamaica to record their collaboration and then they decided to hit some spots, Jah Cure is always going out and enjoying Jamaica and the world… this is nothing new.”

Jah Cure and Mya’s collaboration will be featured on the Grammy-nominated artiste’s upcoming album due in July.