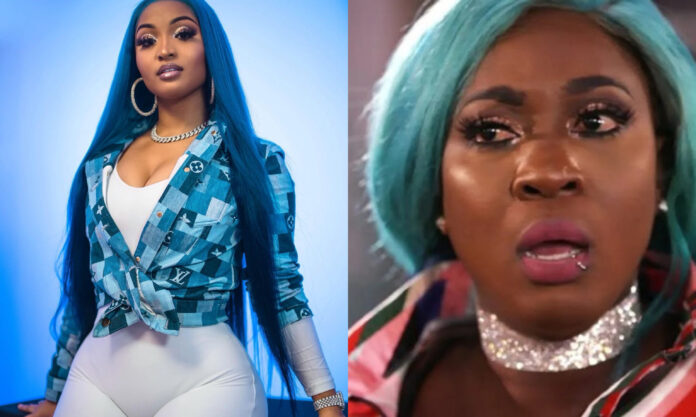 MC Nuffy says that Shenseea has dethroned Spice as the ‘Queen of Dancehall’ and is the now the top female star.

According to Nuffy, the tides have turned, and “Spice crown gone clean.” He says the young star has finally dethroned the “So Mi Like It” deejay in the eyes of fans.

“Yuh think king and queen position easy to take? Lady Saw affi go weh leave her position and only one person was there to take it up, and that was Spice. She did her thing, made some great moves for dancehall, but now she buck,” he said.

“Dis (Shenseea) is the new girl. If yuh notice everybody a give her female artiste a di year fi 2020 and a supmn dem can’t deny. When Spice did fi get it, she get it. So now it may look a way to some people, but she earn every success coming her way. She has great work ethic, she has a mega-team weh help her get a bagga endorsements, and she a get international attention many only dream about. Nuh see all Missy Elliot a comment pan the girl thing. Yuh think Missy Elliot blind? The big dancehall crossover can happen anytime now because this is the girl.”

In recent weeks fans have also voiced similar opinions, claiming Shenseea was finally ready for the throne. However, the “Lighter” star played down the chatter by insisting she is not focused on titles.

Meanwhile, Nuffy says he is well aware he might receive backlash for his comments but he is unconcerned. The entertainer went on to declare that his opinion was also not influenced by his bad relations with Spice.

“When she fi get praise, she get it. But a just facts mi a talk. I did give Spice the princess of dancehall when she just start because Lady Saw was queen, and I tell her say she was going to be queen when Lady Saw leave the industry. I know champions,” he said.

“Mi observe everything weh a gwaan inna di business and honestly, Shenseea gone a lead now. She a do di music weh overseas wah hear, she have a likkle Nicki Minaj thing going for her, and she look like a star. She is the complete package fi dancehall right now and dats why everywhere she go she a lock it down. Dancehall did need something like dis and it come, and when yuh see it come yuh affi embrace it.”