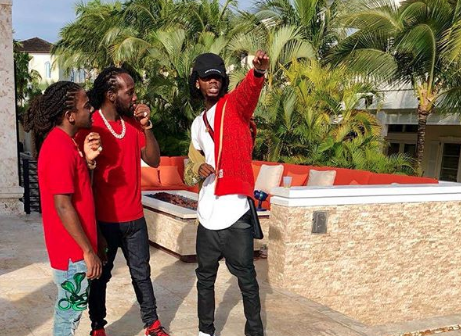 News of the diss track comes after Vybz Kartel blasted Alkaline and Mavado along with their Vendetta and Gully fans last week.

The incarcerated Dancehall entertainer first took shots at Alkaline when his Instagram account uploaded a video of a Gaza fan.

In the clip, a man can be heard asking fans of the “Badness It Name” deejay why were they constantly on Vybz Kartel’s page arguing with his Gaza Nation supporters,  “Cause dem & dem #artiste page#boring like when paint a dry…,” Kartel wrote under the video.

The “Fever” deejay then slammed a Mavado and a Gully fan after he uploaded a video of Floyd Mayweather Jr. showing off his impressive watch collection.

“They say you cant read but they’re #intelligent and #broke  ,” Vybz Kartel captioned the video which got the attention of a Mavado fan who said the same could be said about the “Big League deejay.”

“So wul on deh Vybz Kartel. No same thing ou say bout the Barba Mavado… say him cyaa spell or read?? But him still rich right lol….,” The self-proclaimed “Worl’ Boss” clearly wasn’t here for the comment and wrote, “P****y who name Mavado?,” before going off on the fan.