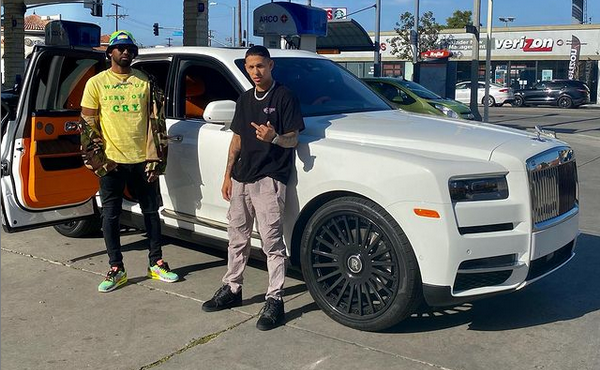 Konshens definitely had time as he clapped back at a fan who tried to troll him over not owning a Rolls-Royce.

The “Gyal A Bubble” star was forced to clap back at the cheeky fan following an exchange on Instagram. In the post, Konshens share a photo saying “God is great”, following Rvssian’s escape from a car accident on the weekend.

Despite the positive intent, one particular fan used the opportunity to try and troll the Dancehall star.

“Konshens a goodly the first yuh ever drive inna one rollce Royce,” the fan joked.

Konshens then replied, “It was… what now?”

“You a legend inna di business fi bruk suh bro. Russian is just a producer and have so much luxury.”

It seems Konshens was definitely in the mood as he told the man he’d send him US$5000 if he commented using his real profile.

“Yuh done gi weh yuh self bro. If yuh did have di 5k yuh woulda just run it to the PayPal without no more argument attach to it… Matter a fact this is my real page.”

Konshens insisted, “U want the 5k now?” and the man said yes.

Konshens would then hilariously call out the fan over his eagerness to receive the money. “And this, my friend, is why u probably drove in alot of Rolls Royces without owning any,” he laughed. “U love too much sweets. Careful.”

The fan was not done yet as he tried to save face declaring he is a film director who earns his living honestly. Konshens then jokingly asked for his portfolio, saying he may employ him if he can afford it. The man would then drop a link and his fees, while complaining over the $5000 he didn’t receive.

“Next time don’t cap about sending 5k my ni**a, u only embarrassing yourself to go on Pinkwall and questimes and all the mixup pages.”

This is where Konshens would stop entertaining the fan, and got a little more heated in his response.

The user then clapped back at Highcoin calling him Konshens’ shadow and a two-hit wonder.

Highcon promptly hit back saying, “Ummm you can guh s**k yuh out granny! Yuh aunty! Yuh sister!!!! And yuh gal if yuh have one!!!!!”