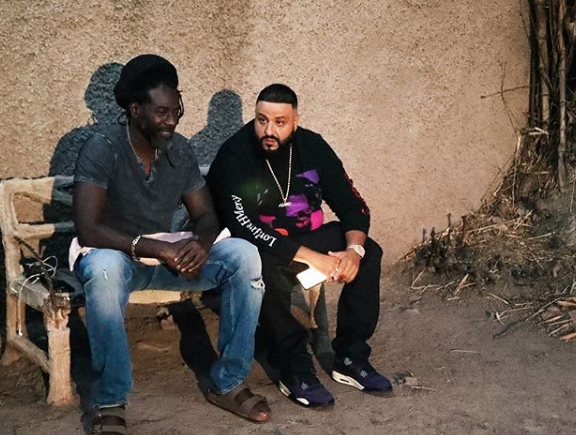 The American DJ, record producer arrived via private jet shortly after 4:00 pm on Sunday for ‘top secret’ trip however his Buju Banton sweater let the cat out of the bag.

Khaled and Banton’s friendship started back in the early 90’s when he launched his disc jockey career.

“@bujuofficial x @djkhaled FATHER OF ASAHD ??holding a firm mediation wit my great friend my brother BUJU ??,” Khaled captioned a photo of the two sitting down.

Sources say DJ Khaled and Banton had a powerful conversation together. The two are looking to do some music together very soon.

Dancehall/Reggae fans are now hungry for some new Buju Banton music after he served a near 10-year sentence on drug-related charges at the McRae Correctional Facility in Georgia.

Last week, record producer and Buju Banton’s longtime friend, Donovan Germain say there won’t be any new music from the entertainer until sometime next year.