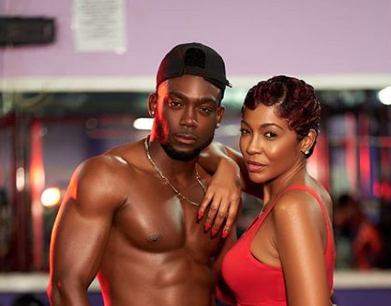 The first lady came under fire last week from supporters of Dancehall entertainer Spice, who accused her of copying “Mine Mine Mine” video concept.

Unfazed, D’Angel uploaded another photo on Valentine’s Day sending wishes with her shirtless personal trainer, “Another one, me and my trainer wishing y’all Happy Valentine’s Day,” she wrote.

D’Angel’s “Mind Yuh Business” is produced by DJ Sunshine for Yellow Moon Records. The official music video is slated to be released later this week.

D’Angel is currently promoting her new songs Brand New, Frighten Firday, I’m Blessed and Give Thanks.

Happy #ValentinesDay from #DAngel and her trainer 😬