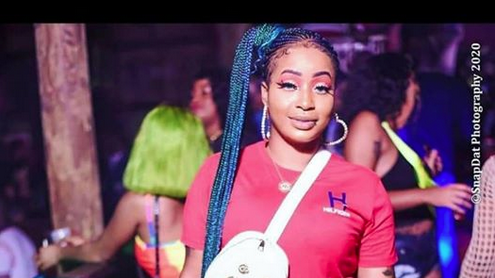 The dancer involved in the fatal incident which claimed the life of another has apologized to the victim’s mother.

The mother of Roxanne ‘Bumpa’ Evans, the dancer who died following a botched dance stunt, says the other performer has apologized.

According to Bumpa’s mother, Olive Clennon, Momo visited her following the accident and offered an apology.

“She tell mi seh she sorry an that she neva mean fi jump pon Roxanne, an that she intend fi jump ova har but she fell pon har,” she said.

“Mi listen wha she sey but a still don’t known what to do, because Roxanne done dead already, and seet deh now, she dead lef har two pickney dem.”

Clennon says she feels heartbroken as she warned her daughter to give up dancing and seek other employment.

“But she neva listen to mi, and seet deh now, a dancing kill har,” she sighed.

According to the other dancer, Momo, she was supposed to jump through Bumpa’s legs, landing on the opposite side. However, she accidentally landed on Bumpa’s body breaking her neck.

Bumpa was rushed to the Lucea hospital and later transferred to the Falmouth Hospital where she succumbed to her injuries.