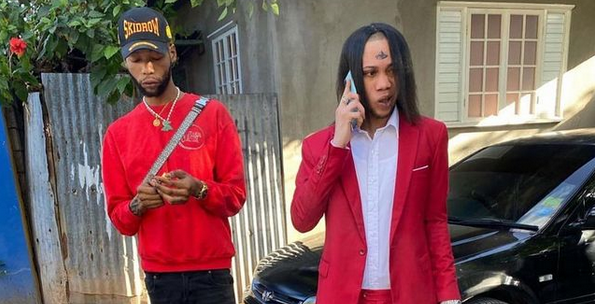 The “Go Hard” deejay found himself on the receiving end of some abuse from fans after a photo of him emerged online. In the pic, the deejay is seen rocking a red and white suit, with his hair straightened.

The entertainer was mercilessly trolled by fans who ridiculed his ‘questionable’ fashion statement.

The trolling did not stop there, as several fans would go on to question the deejay’s interesting hairdo.

“Mi nuh undastan intence head yaso,” one woman questioned. Another female fan would concur saying, “Look I like him, but right now that look is not ready for nothing it’s the hair for me.”

One fan would specifically jeer the deejay’s contrasting shades in skin tone, encouraging him to stop beaching. “How him leg dem look suh white 😂😂😂😂 stop di bleaching dawg,” he laughed.

Foota Hype also seemingly took several shots at the “Pickachu” deejay’s image during an Instagram Live rant. The popular selector was very critical of the direction Dancehall was heading towards, calling out deejays such as Intence.

“Mi si a man put out a picture now inna wig, crème out wig. White like chalk; look like a real snail and dem mi a wanda if a deh suh dancehall deh,” Foota said.