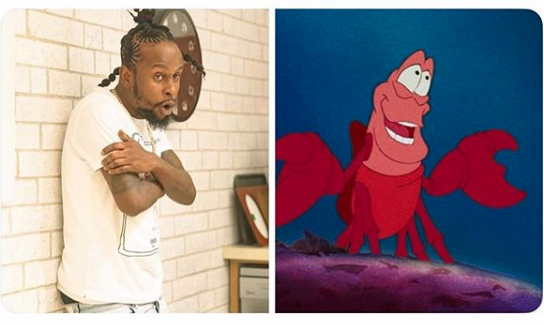 Following Disney’s announcement that the star of its Little Mermaid reboot will be Grownish actress Halle Bailey, Dancehall fans have suggestions for Sebastian.

19-year-old Bailey, forms half the R&B duo Chloe x Halle. It will be exciting to see her take on Ariel, who trades in her beautiful singing voice for human legs. Bailey tweeted that landing the role is “a dream come true.”

Rob Marshall is set to direct, and Melissa McCarthy, Jacob Tremblay and Awkwafina are in talks to star. The film is produced by John DeLuca, Marc Platt and Lin-Manuel Miranda.

Now with Sebastian being from Jamaica, social media users want someone from the island to represent, preferably a Dancehall entertainment.

Sebastian is a servant of King Triton. Apart from his role in the film trilogy, Sebastian features in the animated series, in the Kingdom Hearts series of video games, and even has music albums based on him. View the hilarious suggestions and comments below.

This would be lit ?? #VanessaBling

“Ariel yuh know yuh inna trouble enuh” #Spice or #Popcaan! #Sebastian is from #Jamaica and we need a JAMAICAN ????

We definitely need a real #Jamaican to play #Sebastian! ??? #Spice