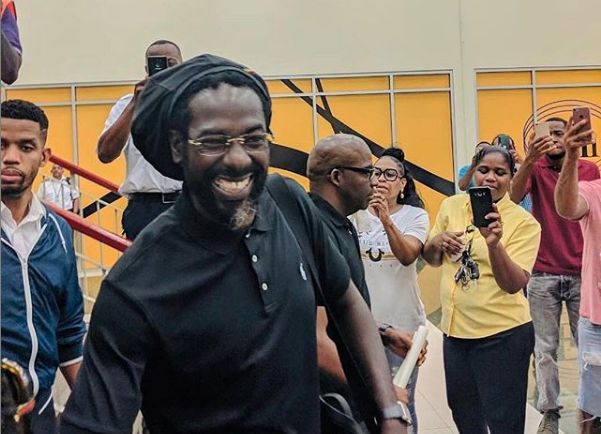 Buju Banton is calling for the relations between Jamaica and Trinidad and Tobago to be improved.

The Reggae icon called up the twin-island republic’s Commissioner of Police, Gary Griffith on stage Sunday night during his set at the ‘I Am Legend’ concert held at the Queen’s Park Savannah in Port-of-Spain.

“Buju Banton, I will take a line from your song, how could you ever think, Trinidad and Tobago, don’t ever doubt we are your friends,” CoP Griffith said to the Grammy-winning entertainer. “And from GG (Gary Griffiths) to BB (Buju Banton), Trinidad and Tobago and Jamaica are allies forever.”

On Saturday, Buju Banton had his hotel room searched by cops, who indicated they were in possession of a warrant. It was later revealed that the search was not ordered by the authorities.

Banton took to social media following the incident and posted a now-viral video.

“I’m chilling in my hotel room and the cops came to check me, a whole bunch of them saying they got a warrant to search my room and all kind of stuff,” Buju Banton said in a video.

Shortly after the video began to make rounds on social media, Griffith visited the Reggae superstar and issued an apology, he also assured the entertainer that a full investigation will be launched into the incident.

“After viral posting, the Trinidadian Commissioner of Police and Representative of the Jamaican consulate paid me a visit to issue an apology on behalf of the Trinidadian Police Department,” Banton wrote following the meeting. “I will not let this issue affect my love for the Trinidadian people or me as I move forward to have a wonderful night tomorrow. Trini we’re still on track love to my Trini family.”

#BujuBanton took the opportunity to invite the Police Commissioner Griffiths (Of Trinidad) on stage and show that despite the upsetting actions that took place Saturday April 20, he has accepted the Apology Of The Commisioner and asking for all to not use this as an opportunity to divide each other. . . . Trinidad ?? and Jamaica ?? Relations between the nation must improve and it begins tonight. #RESET #nodistractions #bujureturns #lwtfconcert via @destinemedia