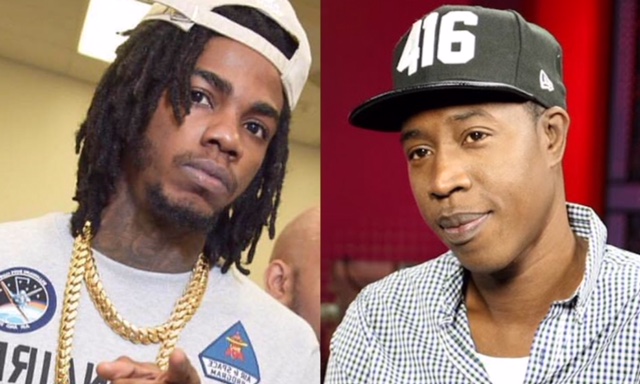 Over the weekend the veteran Dancehall selector told party patrons that he has imposed a one year ban on Alkaline’s music following their recent brawl.

“Mi seh mi a give Alkaline one year bumbocl*****t ban, who nuh like it s**k yo mada,” he said. “Doah figet seh mi could a shoot up unu bloodcl***t and mi hol’ it suh when unu see mi seh one year ban, Alkaline s**k yo mada,” he added before playing Vybz Kartel smash hit single ‘Infrared’ with Masicka.

The ban comes weeks after the Vendetta deejay blasted Matterhorn at his birthday party at Club Euro in Fort Lauderdale, Florida when the selector played ‘Highest Level’, a song by his musical rival Vybz Kartel,

According to sources close to Alkaline, the newly imposed ban will only affect Tony Matterhorn’s career, “Yo right now the boss [Alkaline] just a laugh offa the clown [Tony Matterhorn],” the source said. “Him nuh see seh a the young lord time now? This foolish ban only aguh affect fi him pocket because promoters will now think twice before dem book him.”

Following Matterhorn’s announcement Alkaline also took to his Instagram account to send a cryptic message. The ‘Badness It Name’ deejay uploaded a video of a child listening to his ‘Champion Boy’ single with the caption, “Lol mad”.

According to Dancehall insiders, that’s just Alkaline’s way of letting Matterhorn know that he’s still the ‘Champion’ ban or not.